Nathan's Squirrel on America's Got Talent

Nathan on the cover of today's Pacific Northwest magazine

Johnny Jetpack Chief Scientist Nathan Arnold does business during the day as Nathan Arnold Masonry, crafting Seattle's finest stone, concrete, brick, and masonry projects. Call Nathan at 206-547-3082 for more information. (The living room set in this photo is made entirely of concrete.)

Check out this video of Nathan's latest masterpiece. Skip ahead to about :40 to see the successful attempt.

Head Stick from The Corey.

JJPL at the Moisture Festival

Nathan is rolling out a very special version of the "Jesus Light" at SeaCompression, next to the Cirque de Flambe chill space.

Photos from the lab

The JJPL webmaster paid a visit to the Johnny Jetpack Propulsion Labs on an early August weekend and got a few photos of Nathan preparing for Burning Man.

Johnny Jetpack, in association with Cirque de Flambe, will bring several projects to Black Rock City this year. As you amble along the Esplanade (the Cirque camp is at Esplanade & 5:00), look for: 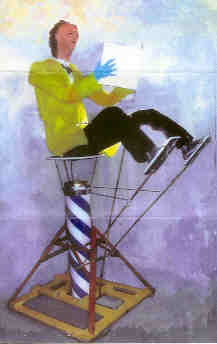 Johnny Enema will perform Sun. Oct. 31 at Trolloween this year, one block west of the rocket on 35th as part of "the haunt" of Trolloween. An exact time is hard to say but most likely around 9:00 pm, depending on the timing of "the haunt." If it rains hard, then Mr. Enema will be performing under the bridge next to the Troll.

The image at right depicts Johnny Enema. Not pictured is the bamboo pole and soda bottle that propels the water upward. The soda bottle is filled with dry ice which when subjected to 5 atmospheres of pressure melts into liquid CO2. An attached pressure hose is used to increase the pressure until the plastic soda bottle ruptures. This occurs at the bottom of a large steel carbon dioxide tank that has the top cut off and is filled with water. The resulting underwater explosion launches the water into the sky in a huge tree-shaped splash. The fast-moving stream of water will carry any lightweight object (such as Johnny) over 100 feet into the sky.

Nathan will be at Burning Man again this year in the Cirque de Flambé camp with four new acts:

Johnny finally took to the skies again June 26 after a year-long break. It was a good launch into beautiful blue skies and featured a new liquid nitrogen feature.

John Cornicello took the shots in this photo album of Launch #40.

Thanks to Adrian for sending this clip of an April 1999 Johnny Jetpack launch (141 KB).

"For the past two months, Nathan Arnold has been obsessed with building a giant, 'vicious, man-eating' squirrel.

"Few people live in a state of childlike wonder or tap into their imaginative powers like Arnold, a mason, oil painter, performance artist and the head of 'Johnny Jetpack Propulsion Laboratories'. . ."

Read the whole story, Johnny Jetpack's creator pursues bliss in some off-the-wall directions, at the P-I.

Larry took the shots in this photo album of Launch #39.

Johnny Jetpack is a 7 and a half foot tall puppet/dummy attached to a giant water rocket backpack. When launched, he obtains heights of 70-90 feet and speeds of 50+ miles per hour in about one second.

He then plummets earthward in a dramatic fashion. This plummet includes a complex system of "parachute for Jetpack", pilot ejection, screams and flailing limbs, and on-board explosion with head detachment. The crowd is then welcomed forward to the safety line to inspect the wreckage.

Jetpack is made from 17 two liter soda bottles, surgical tubing with nylon fabric sleeving with numerous other fittings. Powered by any compressed gas from 80 to 120 psi.

Acceleration is zero to 50 miles per hour in about one second, giving Johnny the distinct "Lynch appearance" (head way down) soon after liftoff.

A system of pneumatic devices causes his arms to flail for up to one minute.

There is a double "pilot and canopy" parachute system designed exclusively for the Jetpack. For the pilot there is a complex pilot detachment and ejection system as well as an on-board "instant mess®" explosion. This explosion successfully causes at-altitude head detachment.