The art of entertainment with pneumatics

Most, but not all, of the present creations of Johnny Jetpack Propulsion Labs® are pneumatic devices powered by compressed gasses stored in 2 litre soda bottles.

If you are driving down one of the roads on campus you stand a tiny chance of seeing what appears to be a short, strange, oddly dressed old woman dancing wildly off to the side of the road. Could it be the Air Witch? The whole Air Witch figure is cloth and papier mâché and weighs only 24 ounces. The Witch herself stands a little over four feet tall. Her incredibly energetic, almost hysterical, "Grateful Dead" style dancing can be attributed to the fact that her bright yellow dress is carefully hooked to a very "energetic" air vent grate. She has what appears to be magical powers when it comes to suddenly deflecting any lightweight missiles that happen too near by sending them 100 feet straight up. Even in hard rain the Air Witch stays completely dry. She is just what many people need to see that are driving down that road.

When Johnny Jetpack was conceived the original vision included an ejected pilot that would flail about with wildly waving arms as he plummeted downward; ideally doing a frantic crawl stroke as if to somehow escape and save himself from be becoming entangled in the wreckage.

The early experiments were all unsuccessful. They consisted of sending high pressure water through hoses that sprayed out next to his hands. It looked ridiculous and didn't work.

A pneumatic engine was conceived that would resemble a steam engine and run on pressurized air. During development and production of the pneumatic arms they turned out to be so lightweight and so powerful the possibility of these same mechanisms being able to flat gigantic wings became apparent and Johnny bird was conceived. These arms usually run even after impact with the ground and that gives the impression that the pilot is still alive and extends the act.

Johnny Non Ambulatory is the same pilot for Johnny Jetpack. For this act he sits on the Jetpack which is encased in a rocket powered wheelchair although it looks a little more like a rocket powered hot dog stand. Made from foam core and bicycle parts, it weighed only 15 pounds. The wheelchair was only used for two performances, the second of which reached an approximate speed of 45 miles per hour before hitting the ramp and then flew about 40 feet before landing in the lake.

Johnny Birdman is a pneumatic ornithopter.An ornithopter is a heavier-than-air craft sustained in and propelled through the air by flapping wings. 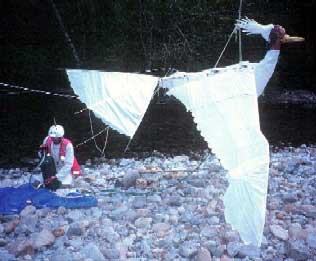 Johnny Birdman has a wing span of 17 feet with a weight of about 20 pounds. His wings are powered by pneumatic cylinders and pistons that run with compressed gas (100 PSI) from 33 two liter soda bottles.

All tests to date are very promising. Johnny Birdman has gained altitude in suspended tests even when wing angle of attack has been way off. Hopefully he will be able to make a maiden free flight. Future plans include pneumatic 'Bird Pooper' and radio control. Also human legs, or bird of prey talons for sheep 'n stuff.

The Instant Mess concept was created during aerodynamic wing tests of Johnny Birdman when it was discovered that lot cattails (species name) could be shredded and stuffed into a soda bottle then after pressuring to 70-80 PSI the specialized cap to the bottle is suddenly released and presto! You have an instant mess. Another good name for this would be "bottled snow storm". This invention could and should be used in land restoration for re-seeding cattails. The Instant Mess is used on all Johnny Jetpack flights. If the parachute and pilot release assembly works as it should the Instant mess is released at the top of Johnny's flight.

The Messington is a harmless looking (white with pink polkadot) rifle designed solely for the purpose of entertainment. It was conceived as a contestant to the good old aqua net potato gun at a festival/party, but we found when we got back into town not many places to use it without getting in trouble fast. It's a great indoor potato rifle. The Messington came into being when the potato rifle's barrel was stuffed with cattails. The cattails are colored with food coloring for added effect.